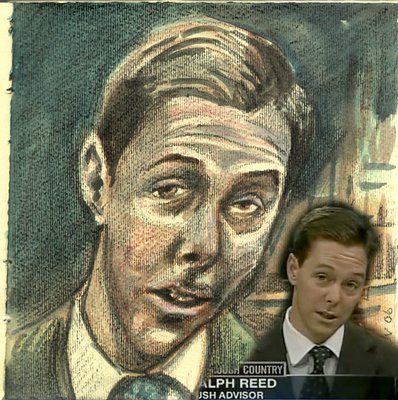 I was watching a clip of a dreadful interview with a geezer named Ralph Reed and became so fascinated by his sinister features that I had to sketch him. For someone raised on British TV, I found the bias shown by the chairwoman quite shocking. The clip can be found on Sam Harris' site: he's the author of "The End of Faith" which is on my Xmas list.
I was trying out a new sketchbook made of some trendy hand-made Indian paper from Paperchase, but found the paper to be almost unusable...an expensive mistake.
Caran d'Ache Neocolor water soluble crayon and graphite on nasty paper 15cm x 15cm
Click pic to enlarge

Now be honest, did you use the pause button to do this?

The paper does look nasty, but at least it gives you a break from the mole skinning.

My system crashed while I was watching the video so I didn't see it all, but nothing surprises me about bias in the US media. Did you read the Observer on Sunday last?

Pity about the paper...

hey man
amazing work in here!!!
thanks for your nice comment and thanks for the link!