Eve of the Revolution 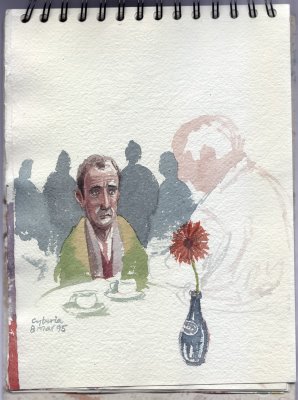 Back in '95 I had seen email and a couple of clunky web sites on friends' computers, but I only owned a stone age MS-Dos machine. I painted this watercolour sketch at a special event at Cyberia (the first internet café in the UK). I only attended because there was free coffee. I felt this new internet hysteria was just another hyped-up fad which would soon fizzle out.
This businessman was mystified by the "interweb" but was very anxious not to be left behind. He was asking me for information and advice in a rather pathetic way.
I could not have foreseen that only one year later my life and work would be transformed by this incredible revolution.
Watercolour on nasty unsized Indian rag paper. 19cm x 25cm.

Looks wonderful, how did the internet transform you life?