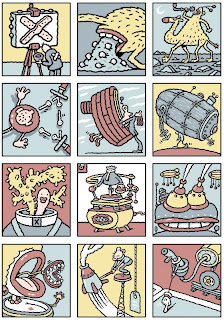 I've been treating a nasty outbreak of the God Fungus which has spread to my canvas, and caused the dog to vomit from her underneaths. In the remains of an ancient library a crooning camel hump serenades the gibbous moon. In a fiendish psychological experiment a close simian cousin's sperm ricochet off the buffers and return to their source....and that's only the first four frames.
Click to enlarge.

I like the colour patterns.
And the tongue-tied teeth.