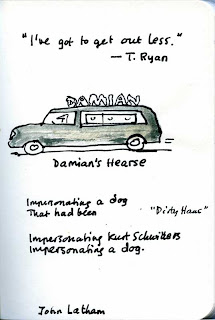 I went to Modern British Sculpture at the Royal Academy with the redoubtable Terry Ryan. However we found the fire escapes in the gallery to be more interesting than most of the works on show. My photo below shows Terry creating an instant living sculpture entitled The Burning Man in Room 7. Blink and you missed it. We did enjoy Damien Hirst's dead flies, but I think Terry's idea for a piece entitled Damien's Hearse is crying out to be built. 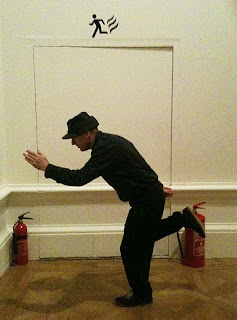 The final piece in the show is by one of our favourite artists, John Latham and features seriously mangled copies of the Quran and Bible. Luckily Latham is in no danger of reprisals because he's been dead for quite some time. 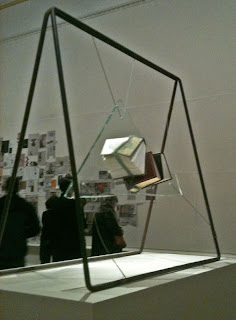 I put a single foot through the door, turn around and run upstairs to see the excecrable Glasgow boys, who at least were decently and charmingly innocents.

Retyped comment:
I put a single foot through the door, turned around and run upstairs to see the excecrable Glasgow boys, who at least were decently and charmingly innocent.