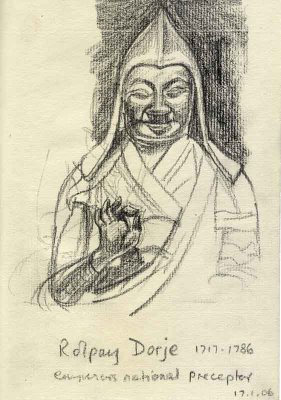 A beautiful bronze sculpture of this Tibetan Buddhist who became the Chinese Emperor's national preceptor. Exhibited at "China: The Three Emperors 1662-1795" at the Royal Academy, London. Not easy to draw in low light, standing up, with lots of people pushing past. However, having taken the trouble to draw it I've got a much clearer memory of the object. Click pic to enlarge.
Graphite on Fabriano laid paper 12cm x 17cm

Saw some of your other work - I love casein and arches.