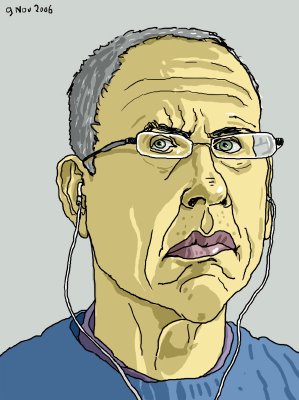 Had beer and sandwiches with the folk from Illustrators Direct today; we held our meeting at the downstairs bit of London's Political Cartoonists Gallery. Later I cycled down to the National Portrait Gallery to check out the Hockney Portraits show. I realised that Hockney is a superb graphic artist and draughtsman but a really lousy painter. I would dearly love to own a set of his Rake's Progress etchings. My other realisation from the show was that his muse Celia bears a striking resemblance to his mother.
Anyhow, the nine quid entrance fee was worth it because he inspired me to have a go at self portraiture and I did this when I got home. I tried something new; I simply drew directly on the Wacom screen with no preparatory sketch. The scowl was not intentional, it just turned out that way.
Wacom Cintiq, Photoshop CS, Mac G5. Click pic to enlarge.

Hi Ellis,
Nice job with the tablet portrait.
What were you listening to at the time?
Super jealous about your trip to the portrait gallery in London. Been there a few times my self.
*R

This guys's got some attitude eh? You have to do more of these. You're an interesting dude now. The 2d digital style of this one is cool.